Aren't you lucky? This is the final installment in the retrospective, and this is the one where I actually praise the films I liked from 2012. Praising things isn't something that comes naturally to me—because I usually have a nagging feeling that things could have somehow been better. And that couldn't be much more true than in 2012. It wasn't a very good year in film overall. It seems as though I say that every year, just as the dyspeptic financial pundits seem to perform their grim autopsies on the American economy every year. The bright side is that eventually things have to get better. In film and the economy. Right? There is a rock-bottom somewhere, and I have a feeling we'll find it—and then we can have our Cher-like combacks. Do you believe in life after love? I do, Ms. Sarkisian, but it's high-time we put away the tassels and get out the compression socks.

I have to admit I was impressed with Josh Trank's revisionist superhero tale Chronicle, in which two bookish cousins (Dane DeHaan, Alex Russell) and their token black friend (Michael B. Jordan) happen upon a crystalline energy force in the forest that gives them incredible powers, like strength, telekinesis, and levitation. Now don't get your hopes up. This isn't exactly naturalistic reimagining of the classic superhero tale, but it does ground the unbelievable in a more relatable world than the typical Marvel comic book adaptations. And it's entertaining—which I suppose is the most critical factor in a superhero movie, right? There are even a few exhilarating moments in the film—like when the airborne boys are suddenly grazed by a commercial airplane and during the apocalyptic finale, where there is a sense of real peril. This isn't Zod tossing city busses across the street; even if the psychologies here are a tad simplistic, they're at least convincing in on an immediate level. 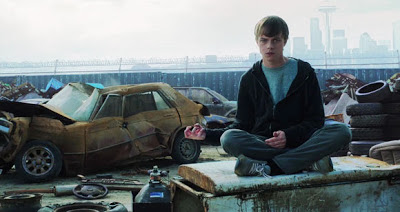 I have to admit that Quentin Tarantino's Django Unchained qualifies as a disappointment—but that's only because I know that it's a Tarantino film. You can't help feeling that only half of his pistons were firing for this slavery blaxploitation mish-mash. Firstly, the plot is much too slack—especially for a two hour and forty-five minute movie. At the outset, the real plot of the film is deferred until later so that we can watch Django and a German dentist named Schultz (Jamie Foxx, Christoph Waltz) do a little bounty hunting. This is an uncomfortably pointless stretch of the film—but fortunately it's not all that long before we get to the meat of the adventure, in which Django and Schultz try to get back Django's wife (Kerry Washington) from a grinning, sadistic plantation owner (Leonardo DiCaprio). It's unfortunate that this part of the film doesn't make much sense. Did they really need to dream up this elaborate and ridiculous charade to buy back an ordinary plantation slave? I tend to doubt it, and the rationale that Schultz offers isn't very persuasive. It's essentially a clumsy MacGuffin that didn't even bother to disguise itself.

And yet... a subpar Tarantino film is generally better than a top effort by a lesser director. For the most part, Django Unchained is entertaining—if not terribly thought-provoking—and is peppered throughout with some great scenes that make you forget (for a little while at least) the bloated running time. 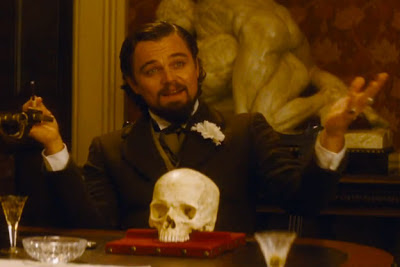 A much more successful exploitation film was William Friedkin's adaptation of Tracy Letts' play Killer Joe, which makes Django look a little timid by comparison. I think the film should be included in an evolving genre that we might aptly call white trash gothic.  Matthew McConaughey stars as the title character, a corrupt Southern cop-slash-hired hit man who is employed by a young man with gambling debts (Emile Hirsch) to kill his mother for a life insurance payoff. His trailer-trash family members—seemingly escaped from the green room at The Jerry Springer Show—serve as his accomplices and adversaries in this brutal exploration of the deformity of morals in contemporary America. McConaughey and Gina Gershon enact a particular grotesque ceremonial with a 'K Fried C' drumstick near the film's conclusion that delivers us, it would seem, to a hell defined by depraved ingenuity. Whether this adds up to very much for you probably depends on how cynical you are. If you're a glass-half-full type, you'll probably see it as little more than a circus side show. 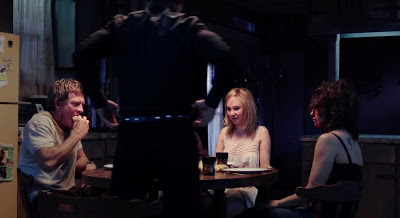 Speaking of brutality... Andrew Dominik's Killing Them Softly was another exercise in cynicism that was about as subtle as a sledgehammer in china shop. This isn't a criticism, per se, because I feel that it works as a sort of over-the-top gloss on the ethical malaise in the economically faltering America of today. Brad Pitt plays a very different hit man from McConaughey's; Pitt's Jackie is a steely professional with a reserved sense of propriety, which is dictated less by morality than a taste for simplicity and efficiency. Jackie wouldn't have the time or inclination for the excesses of Killer Joe. I'm not exactly sure that this makes him a 'better' man—because the same unremitting self-interest characterizes them both—but if we can't condone his choices, then maybe we can admire his work ethic. The Achilles' heel of the film is two overly long, irrelevant, and energy-sapping scenes with James Gandolfini, who plays an old school hit man who's lost his professional mojo. You can almost hear the film screeching to a halt when Gandolfini is on the screen. 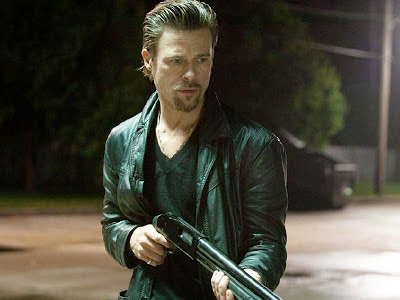 A more serene brutality informs David Cronenberg's adaptation of Don DeLillo's novel Cosmopolis. The greater part of the film takes place in a limousine crawling through Manhattan (actually, a very poorly disguised Toronto) so that a powerful and indolent businessman (Robert Pattinson) can get a haircut. Here and there along the way, his limo is invaded by colleagues, acquaintances, and paramours who engage in alternately Mamet-like, didactic, and inscrutable dialogues on the bankruptcy (in more ways than one) of contemporary American life. Obviously this isn't a film that I would recommend to everyone, but its provocative, Socratic chill kind of hit my sweet spot. I can understand completely why people would or might hate this film with a violent passion, but its flaws—which are not slight, by any means—are overlookable for the pleasure of a front row seat watching society symbolically going down the shitter. (Because it's 'merely' symbolic, the film offers more food for thought than despair.) 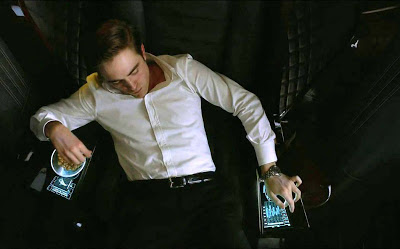 But enough is enough. It's time to unveil my Top 5 film list of 2012—but again I'd ask that you remember that I still haven't seen a few major contenders like Michael Haneke's Amour and Leos Carax's Holy Motors. I haven't discussed all of these films, but the blog needs to move on to other topics. I'm getting restless.