the stench of a thousand yesterdays.

I have a particularly strong sniffer. You should probably know that about me. I wouldn't call it a claim-to-fame, but it's certainly a claim-to-idiosyncrasy.

For example, I was the only person in the office who detected the very faint smell of natural gas a few years ago; everyone else was quite content to spend the rest of the workday toiling away indifferently in a building that could conceivably blow up like a Michael Bay set piece at any moment. (I'm probably just exaggerating in the interest of assigning superhero attributes to my schnoz, but it's the only thing I have.)

A few weeks ago, facilitated by these unnatural powers, I smelled something I hadn't smelled in a long time. I was sitting at my desk, seeming to be working, as is my wont, when I briefly picked up a scent that reminded me of my grade school. I can only speculate what the 'recipe' for that scent might contain—perhaps paper products, cleaning supplies, a dash of mustiness, maybe even mildew—but suddenly there it was... and it was unmistakable. 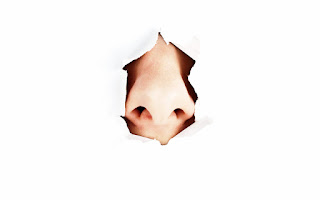 That smell reactivated a storm of memories. Sometimes when we recall a time in our lives, we remember a particular incident that stands out for whatever reason, but at other times we suffer a bombardment of various memories and feelings all at once; these different memories 'speak' at the same time and create a sort of recollective noise that stands in for the whole past that we are attempting to recall. That's what happened to me when I was sitting at my desk and I smelled that smell again.

I remembered our steely, glass-eyed principal Sister Pascal at the microphone in church shaming the kids who weren't going to attend the children's Christmas mass. ('Look at them. None of them have time for God... We'll see if God has time for them when they die...')

I remembered peeing my pants in first grade and trying to clean it up with some borrowed Kleenex. I thought nobody would notice that I was sitting in a pool of my own urine which was slowly dripping onto the floor. This is the way a desperate seven-year-old's mind works. (When you stop to think about it, it's probably not terribly different from the way a desperate adult's mind works.)

I remembered Melanie saying that she thought it was good and right that we got back at the Japanese by dropping atomic bombs on them because that's what they deserved. They attacked us, after all. And I remembered the disapproving look from the teacher. This wasn't the reaction she was looking for.

I remembered in May we used to sing the Litany to the Blessed Virgin Mary. The text was printed on purplish mimeographed papers folded into quarters. Every time we got to the part where we sang 'Tower of David, Tower of Ivory' everyone would look at me in a taunting kind of way. It was embarrassing to be looked at. I hated May. I hated the Litany to the Blessed Virgin Mary.

I remembered when Mrs. Moynihan called Steve P. a 'pupil' and he cried because he thought it was an insult.

I remembered gym class. An entire wing of the Museum of My Adolescent Humiliations could easily be devoted to incidents that took place in the Corpus Christi grade school gymnasium and (in nicer weather) at the nearby Boland Park. Whether I was trying to walk the balance beam, throw a football, or simply run laps around the gym at a reasonable pace, I automatically assumed that I was a paragon of physical ineptitude... so that's what I ultimately became.

I remembered Sister Geraldine—or was it Sister Innocencia?—telling us that one of the saints was tempted by Satan with a vision of Jesus Christ and the Virgin Mary having 'impure relations.' I'm not sure if I knew at the time what 'impure relations' might entail, but my mind left no stone unturned in trying to imagine what they might be.

I remembered diagramming sentences at the blackboard. Although I was certainly no slouch in academics at the time, diagramming gave me a feeling of accomplishment that multiplication tables or state capitals just couldn't. I think it had something to do with finding order and structure in the seemingly arbitrary or disordered. Or maybe I'm just being retrospectively grandiose.

I remembered when Stacie came back from summer break missing part of one of her fingers. It had been cut off by a saw, I think. I had so often imagined what the finger-sawing incident must have been like that I can still recall it vividly today.

I remembered when one of our teachers asked, 'Who is buried in Grant's tomb?' I was so excited because I knew this one... I raised my hand and answered, 'George Washington!' because that was the answer given to the question in a Woody Woodpecker cartoon. Imagine my surprise and embarrassment when the teacher told me I was in fact wrong. It was one of many times that television betrayed me. (As another for-instance: I spent my early years spelling the word 'different' as it's spelled in the opening titles of Diff'rent Strokes.)

I remembered creating a crude comic strip called Chippy & Friends and passing it around to a few friends in school. It was about one of our classmates (Eric S.) who had buck teeth (like a chipmunk) and whose parents were much older than the rest of our parents. The comic strip featured lots of nudity—because Chippy/Eric's septuagenarian father was having an affair with a young bimbo with large breasts in my alternate version of reality—and needless to say if any nun had ever confiscated one of those comics, I would not be writing this blog entry right now because I would be dead.

Of course, lots of memories came to mind when I smelled that smell. It would be impossible (and certainly uninteresting) to itemize them all, but altogether they left me with the vague and unpleasant feeling that often accompanies memories of childhood. I think it comes from the realization of just how miserable growing up seems from the vantage of adulthood. But it really wasn't all that bad at the time—if only because I didn't know any better. One's stockpile of comparative experience is still very small during childhood, so it makes things like psychological torture and daily humiliation eminently more palatable. As an adult I am freer to evade some unpleasant experiences and shirk responsibilities (albeit with consequences) than I was as a child. The yoke of authoritarianism weighs heavily on the child, whose life is not yet, properly speaking, his own.

To recall that time of extreme subjugation from the perspective of the present (which is a time of mitigated subjugation, I'd say) is a little horrifying and exhilarating at the same time. It simultaneously reminds me of the terrors of growing up and the profound innocence that doesn't mind them all that much...