the ethics of the symbol.

I watched Ridley Scott's Hannibal the other night. (That sentence should evince the spirit of shamed confession that motivated it.) I know that most of the rest of the sentient universe watched and recovered from this film over a decade ago, but I'm a newbie to Gary Oldman's excessively cackly portrayal of Fire Marshall Bill. (If you were channel surfing and accidentally happened upon Hannibal, you'd probably just think that Bruce Jenner had taken his plastic surgery to the next level.) 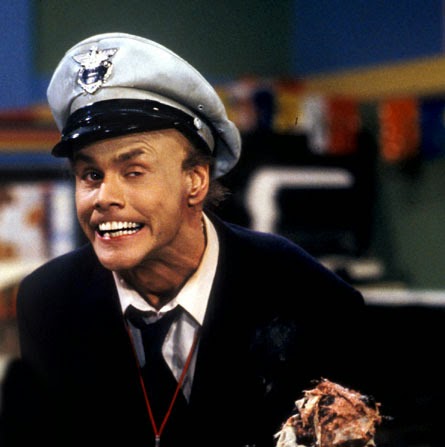 In the film, Oldman plays Mason Verger, a child molester whom Dr. Hannibal 'The Cannibal' Lecter has persuaded to self-mutilate during a psychotherapy session. Now years later, Verger is bent on revenge (of course)—against both Lecter and (it would seem) the audience.

If I myself were hideously deformed—and some might justifiably argue that I am—I would be more than a little honked off by the representation of the disfigured in this film. It's not as if there's a surplus of deformed characters in Hollywood which might permit us to say that this portrayal is just one of many which evoke the lives of the aesthetically disadvantaged. Why must 'ugliness' on the outside inevitably suggest ugliness on the inside? And don't cite Mask or... or... The Elephant Man as counterexamples—because that's the other variety of film about the deformed: i.e., that kind of well-meaning yet sometimes patronizing film that posits the misunderstanding or abuse of the deformed as a problem to be solved or, if not solved, at least addressed. Because film and television are such powerful and pervasive media, we might argue—too idealistically perhaps—that the entertainment industry has an ethical obligation to normalize minorities as much as possible. While there's nothing wrong with entertainment for pure entertainment's sake, per se, why not depict social outliers in value-neutral terms when it doesn't impair the entertainment product in question? I'm not saying that Mason Verger shouldn't make moral decisions—good and/or bad—but his morality should not derive essentially from his deformity. (I realize that the character's pedophilia is ostensibly his 'essential' moral failing, but this is a point that's somehow lost in a narrative that seems to fetishize the character's deformity as a freak show.)

Now I want you to take a moment to consider what you have just read in the previous (looong) paragraph. Do you agree with it? Did you find yourself nodding along to the points I made? Or did they bother you in some way?

I've been putting you on a little here. That paragraph doesn't necessarily reflect my own feelings on representations of minorities and outliers in the media. I balk at the suggestion that a writer or filmmaker is obligated in some way to scrub his characters clean of untoward associations. For instance, let's throw out the issue of pedophilia with respect to Oldman's character for a moment. Let's just say that he is a deformed man and leave it at that. Would it be inconceivable in a narrative sense to ascribe bitterness or vindictiveness to such a character merely because of his deformity?

I don't think so. From a character development standpoint, I think we can easily understand how a deformed person might end up bitter and angry—and to that extent we might empathize with him (if he were a fully developed character, that is—which Gary Oldman's character is not). His psychology might not be representative of all people in his situation; it might not even be representative of a significant subset of people. BUT—and here is the salient point—good characters are individuals, not mere symbols or stand-ins for classes of people.

When we watch a movie in which we feel characters are only there to stand in for blacks or women or the handicapped, we generally have the sense of being preached to. Symbolic characters tend to be didactic, unpersuasive, and far too general to empathize with in any meaningful way. (Paul Haggis' film Crash, for example, is populated by nothing but socioeconomic symbols. Yes, minorities are depicted in both good and bad lights in the film, but this is part of Haggis' trite thesis, and his characters only exist in so far as they support it.)

Am I making the case that no depiction of minorities in films is offensive for the reason that any kind of behavior can be justified on an individualistic basis?

No, I am not making that claim. But here is where the critical problem arises: How do we determine when a filmmaker is saying something about race or gender or sexuality or disability versus when a filmmaker is saying something about a specific experience of race, gender, sexuality, or disability? It's certainly a fine line that I would never seek to define in black-and-white terms.