My ex's brother believed that The Blair Witch Project was exactly what it (fictionally) purported to be—found video footage of the last days of three young documentarians researching the legend of the 'Blair Witch' in the wilds of Maryland. At first it was difficult to grasp that a twentysomething man actually believed an amateur video of three persons' psychological disintegration and (presumed) death would be distributed for the vicarious thrills and casual entertainment of audiences worldwide. Now, of course, in the full bloom of the reality TV era, I realize how naive I was. It now seems entirely probable that—once the last inhibitions of reality television have been worn away—a snuff film will elbow a superhero franchise out of the top spot on the box office chart. 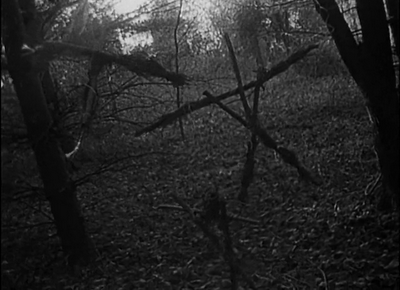 I asked my ex why she didn't disillusion her brother; she shrugged me off. I'm pretty sure it was because she didn't want to embarrass him when she exposed him as preposterously gullible. It would be akin to the shame that a fourteen-year-old might feel when he discovers that there is no Santa Claus—and that all of his peers have known this for six years already. At any rate, he didn't seem overly distraught to be living in a world where the events of The Blair Witch Project could really take place. So we said to the sleeping dog: Lie.

There's a reason why his gullibility wasn't as idiotic as it could have been. As a work of cinéma vérité, The Blair Witch Project is utterly convincing. I don't know about you, but I think I knew a half dozen girls exactly like Heather (Heather Donahue) during the '90s. The footage of the ill-fated trio trekking through the woods is as persuasively real in its banality as it is in its terror. These interactions—as annoying and prosaic as they sometimes are—are the authentic interactions of young people in their twenties. (Having actually been one—eons ago—I can vouch for the veracity.) 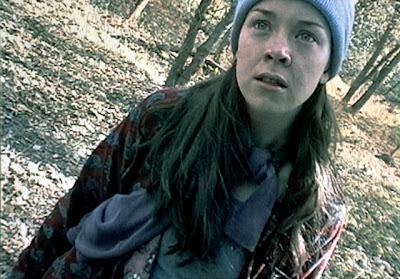 I had a hunch that—over a decade later—The Blair Witch Project wouldn't hold up to my initial (very positive) impression. I was wrong. I still think it's one of the best, most well-crafted horror movies out there—without requiring all the gore, pointless special effects, and genre frippery that's become a staple of the modern horror film. Blair Witch certainly has its detractors though—and many of them will point to the apparent nothingness of the film as its great fault. But that is precisely the key to its success, in my opinion. The film doesn't resort to another crude literalization of boogeymen but instead creates a pervasive feeling of dread by limiting what we see and what we know. We can't even mentally reckon with the evil of the film because, having never been seen or explained, it's always several steps ahead of our ability to come to terms with it. It's everything we can imagine all at once.
excreted by David at 6:10 PM