children of a much lesser god.

I would guess that, ever since the city was invented by the parking garage industry, there has existed a mutual distrust—if not outright enmity—between larger urban centers and their sprawling hinterlands. For rednecks, white trash, and inbreds alike, city life has often been synonymous with moral decadence, crime, ostentation, pretense, and H&M stores as far as the eye can see—while, conversely, faggots, spades, and kikes from the inner cities have long been wary of the ignorance, superstition, and savagery thought to be lurking in the shadows of the bait-and-tackle shop just off the interstate. 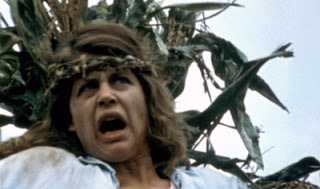 They call them FLY-OVER states for a reason, honey.

At the outset, it would seem that Children of the Corn charts a familiar course: an educated urban couple (played—very badly, I might add—by Linda Hamilton and Peter Horton) drives through the wastelands of Middle America and finds devilment at work out in the cornfields, where a cult of children—some of whom are a little long in the tooth to deserve that name—spend most of their time skulking and killing people with farming implements. The cult is led by an androgynous boy with an apparent iron deficiency named Isaac and his chronically over-emoting henchman, a creepy ginger named Malachai. (Is 'creepy ginger' redundant?)

Now I might court controversy here, but I would argue that the children of said corn are implicitly Amish—or they are at least intended to make viewers incorporate some of what they know about Amish people in the backstory. (In other words, they ride in buggies and make apple butter.) Maybe I'm totally off-base here... I don't know... Do you see any similarities? 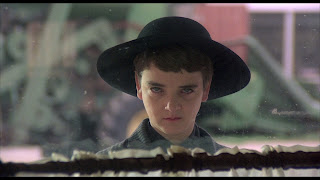 Isaac from Children of the Corn. 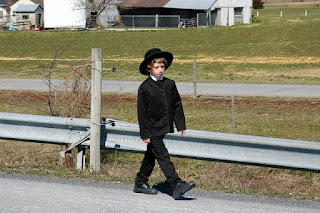 Real-life child of the corn, out for a stroll.

Children of the Corn tricks us into thinking that this is just another in a series of films giving expression to liberal America's fear of religious extremism and backwoods 'justice.' But then the film does a strange thing—from an ideological standpoint, at least: it validates these children's odd and uncivilized beliefs. The weird Jesus-Devil that they worship and commune with actually does exist, although—without any apparent concern for theatrics—he manifests himself as a moving bump in the ground—kind of like an earthen Adam's apple. When the kiddies suddenly turn on their master Isaac and hang him from a cross in the field like a scarecrow, this marauding lump of dirt assails the cross and blasts it up into the sky like a bottle rocket.

Well, now. This makes Children of the Corn perhaps one of the vehemently anti-rural films I've ever seen—because not only are these half-wit cornshuckers dangerous in and of themselves; they are also able to summon a demonic hellbeast from the depths of Hades. So there you have it: hicks are both an evil unto themselves (of course) and conjurers of a greater supernatural evil. Unfortunately, the supernatural powers of the devil seem largely restricted to making the clouds move rapidly through the sky and starting small electrical fires, the likes of which can usually be snuffed out with a common household fire extinguisher—but this doesn't diminish the fact that bumpkins apparently have a hotline to hell. And a dearth of Starbuckses. If that's not enough to make the average city-dweller hide under the covers of his IKEA bed with a shiver of dread, then I don't know what is.

I haven't actually seen Children of the Corn since the 1980s. So it was obviously a great shock to me when I watched it last night and discovered it was a complete piece of shit. Veering in tone between cheesy sitcom and an episode of The Hitchhiker, this is the kind of movie that you space out during. You start thinking about your life: Where has it gone? Where is it going? Are there any Nutty Bars left? And then you remember the movie is still on, and Linda Hamilton and Peter Horton are still wandering around a deserted town, being stalked by some kids who—and I'll be honest here—look like a bunch of pussies to me. The only weapons these Jr. Luddites seem to have at their disposal are scythes—a dramatic weapon, to be sure, but maybe not the most practical one. I hate to celebrate the Second Amendment, even fictitiously, but—c'mon, Peter Horton—go get your ass a Glock or something and let's spill some brains outside the Tastee Freeze. 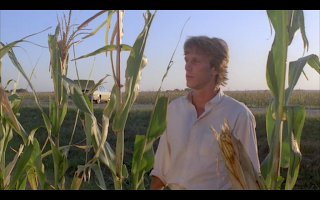 When a dead child wanders in front of your
car, check all nearby cornfields for clues.

There are so many stupid and annoying things about this film that I can't really devote sufficient outrage to each of them individually. I'll have to content myself with listing a few and then trusting you to be outraged for me. Be my surrogate outrager.

Email ThisBlogThis!Share to TwitterShare to FacebookShare to Pinterest
file under: children of the corn, film, halloween film fest