Béla Lugosi looks like a mafioso of yore or the man in the hairnet who works the counter at an ethnic delicatessen on the Lower East Side. One thing he does not look like, however, is a vampire. Ever since I was born, the pop cultural machinery has been working me over, trying to hoodwink me into believing that Lugosi is the archetypal Transylvanian vampire, but I just don't buy it. He's too paunchy, too hammy, and too old for my taste. If you're born of East European stock, as I am, you have about a dozen older relatives who look a lot like Lugosi—all of whom can't remember your name. They have drawers full of ketchup packets—even though they never use ketchup—and they still eat entire meals comprised predominantly of lard and horseradish. At Christmas get-togethers, they talk about two things: (1) all the distant relatives who are seriously ill, dying, or dead and (2) how the spades are overrunning their neighborhood and not taking care of their lawns. If you dare to get close enough to these men, you'll find they smell of mentholated ointment and, faintly, of sour milk. 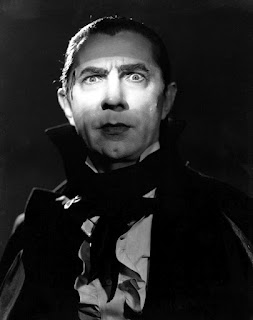 I'm just going to be honest here... Count Chocula is a more convincing vampire than Lugosi ever was. He uses less Grecian Formula and lipstick, and he's a subtler actor. Sometimes I felt that Lugosi wasn't even told this was a sound picture. I mean, he's really playing to the back rows in this thing.

I don't know. I guess there comes a point in your life when you just have to accept the fact that vampires maybe aren't your thing. First Nosferatu—then Twilight—and now this... I guess any pervasive vampire-related dread is sort of counteracted by the knowledge that they're dormant during the daytime, fairly slow-moving and unathletic, and not terribly smart. Again, like many of my Polish relatives.
excreted by David at 8:01 PM