pleasence: the man, the legend.

Do you want to know why a majority of horror films end up being critically or commercially unsuccessful? Well, tough nuggets—I'm going to tell you anyway. You see, far too many horror movies today suffer from a dearth of Donald Pleasence. Lest you blame this unacceptable scarcity on Pleasence's death from heart failure in 1995, let me remind you that they are doing wonderful things with holograms these days. Just ask Tupac Shakur. Many youngsters brought up in the post-Pleasence era are woefully ignorant of a time in cinematic history when you immediately got Donald Pleasence on the horn if you needed a shrink, priest, or police inspector in your garden-variety horror film. If there was a mass murderer or deranged lunatic on the loose, you bet your ass Pleasence would be there. Goateed and scowling, he'd do all the boring cutaway scenes, when you needed a little breather from the tension or the gore, and he'd try his damnedest to lend the film a little artistic respectability with his crisp elocution and his ominous line deliveries. (Par exemple, from Halloween... Jamie Lee Curtis: 'Was that the boogeyman?' Pleasence [squinting, portentous]: 'Yes... as a matter of fact it was.') 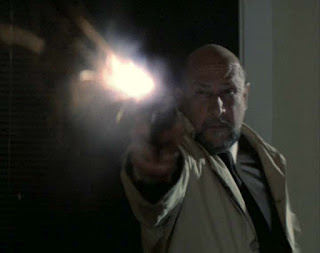 Donald Pleasence starred in a total of five Halloween films. Surely only his death prevented him from appearing in any more. He also appeared in the horror films Phenomena by Dario Argento, Prince of Darkness by John Carpenter (previously discussed), From Beyond the Grave, Alone in the Dark, and this film—originally known as Death Line in England, its country of origin. I might go so far as to claim, however audaciously, that Donald Pleasence was the go-to straight-man of the modern horror film era. (I love being audacious.)

Pleasence turns in a wonderfully idiosyncratic performance in Raw Meat, which is (yes, unpromisingly) the tale of a cannibal, covered with countless large, pus-engorged sores, who lives in an abandoned subway tunnel in London and grabs a bite to eat from the buffet of the last train riders at the nearby Russell Square station. If you were hoping that Pleasence played the cannibal, I'm sorry. It wasn't meant to be—and that is not what Donald Pleasence does. He's the voice of reason—or the suited professional whose unfortunate job is to do battle with whatever form evil takes in a given film. It could be a cannibal with problem skin, a masked murderer, or even a canister of swirling green fluid. 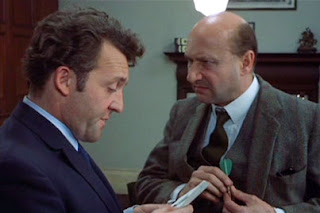 Appropriately then, in Raw Meat Pleasence handles the role of the grouchy, smart-ass police inspector, who initially suspects an American student in the recent disappearances from the station (for reasons too implausible to go into here). The film is really two films at once—the story of the cannibal's revolting life underground, amidst decomposing corpses and seeping bodily fluids, and the life above ground, where the inspector's investigation plods along, with no shortage of sardonic humor. Both halves of the film are somewhat effective—Pleasence's half more so than the cannibal's—but they are oddly incompatible. Watching Raw Meat is a lot like flipping between two channels on TV, without the physical effort required in the actual flipping—but at the end the two shows somehow merge, and it's disorienting.

I have to hand it to Raw Meat though. There is some genuinely sickening stuff in this movie. You kind of think you get immune to gore in this day and age, when most slasher films are little else but a catalog of creatively grisly deaths, but Raw Meat's cannibal—covered with all variety of gaping sores and oozing boils—ends up scoring very respectfully on the gross-out meter, especially for 1972. You definitely want to make sure you're not eating pizza while you're watching this. 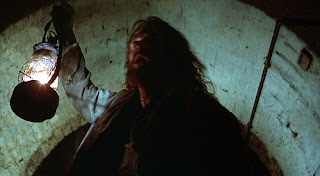