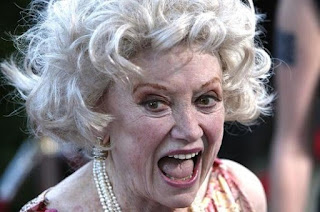 Phyllis Diller died the other day. You probably met this news with either mild, passing interest or the question, 'Who?' Although Ms. Diller's career predated my birth by quite a few years, she's always been one of those low-grade or late-career celebrities who you thought would always be around, somewhere on the periphery of our cultural consciousness—no longer a marquee name or a tabloid fixture, to be sure, but an instantly recognizable relic from the pop culture scrapheap. 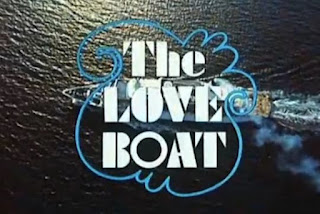 So many high wattage celebrities who enjoyed their heyday earlier in the twentieth century slummed it on crappy television shows during the 1970s and 80s (when I was growing up). You'd almost suppose anthology series like The Love Boat, Fantasy Island, and Hotel were conceived with the charitable intention of keeping B-listers and washed-ups like Ethel Merman, Charo, Carol Channing, and Wayne Newton off the dole and gainfully employed. How many lines of coke were snorted off Captain Steubing's table in the Pacific Princess's dining room between takes by Mariette Hartley and Ricky Nelson? We can only tally the kilos in our imaginations, I suppose, but the cultural residue of those decadent days still haunts me. The fond memory of Lauren Tewes wielding her clipboard recalls the lost securities of childhood—when I'd put on my pajamas, bask in the euphoric knowledge that I didn't have school the next day—The Love Boat was on Saturday nights for most of its run—and settle in for some hokey television featuring old celebrities on a ship. (Or on an island. Or in a hotel.) I didn't even know what a lot of these guest stars were famous for; to me, they were just famous for being on these dumb shows. Did Helen Hayes and Olivia de Havilland do something remarkable before they ordered a strawberry daiquiri at Isaac's well-tended bar? If so, it was news to me. 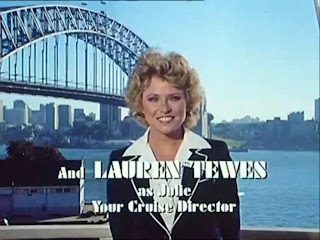 Needless to say, Phyllis Diller was no stranger to The Love Boat herself. I can't say I remember her episode, but nothing seems more natural to me than Ms. Diller poolside in a feather-fringed robe cackling her inimitable cackle at some non-joke delivered by Fred Grandy. Just the thought of it transports me back to those far-off days when I was buffered from the cruel and unknown world both by my parents and by the sweet, irretrievable ignorance of childhood.

Marcel Proust had his madeleines, and I have my bad television. His talisman was surely more poetic than mine, but we can't control what our memories attach themselves to. Sometimes it's the strangest, most inconsequential things—artifacts that we can't even trace back to their source.

When Phyllis Diller dies, time is glimpsed in motion. My childhood stands shoulder-to-shoulder with who I am now. Those overwhelming impressions of youth have shrunken or dissipated, leaving my adult self wandering through the haziest memories with only faint recognition. But I still remember what the security of a home feels like—fortified by those invincible guarantors, my parents... who have also grown old now. Sometimes I want to dig in my heels and hold time down, so it can't move anymore. I want to strongarm the forces of nature into keeping still—even for just a while. I don't want to give everything up. I don't want to be an orphan. I don't want to be an adult. I don't want to be the next in line.

Sometimes I have dreams that all of this is a game. This isn't really the way things are. We don't grow old or die or lose anything. We just haven't been told yet. We're just waiting for the punchline.

Those are some wonderful fuckin' dreams... while they last.
excreted by David at 4:45 PM