file this under boring.

I don't really care about my job anymore. I guess you could say I never really cared about what I do, per se, but I always kind of valued the perception by others that I was a reliable, hard-working, proactive employee. But no more. I'd like to be able to claim that my new-found apathy—well, actually, it isn't so new—is the consequence of my realization that I am being exploited by the owners of the means of production—but let me be honest here: I don't really mind being exploited. In fact, it sounds kind of sexy. Exploitation means that I have something that others find useful, and it's nice to feel to useful.

My workplace apathy is, unfortunately, more narcissistic in nature. I'm just fucking bored out of my mind. And this isn't meant to imply that I don't have plenty of work to be done, but just that I don't find any of it terribly interesting.

What's the obsession these days with things being interesting? My guess is that if you lived in a one-room shack on the Western frontier in the 19th century, interestingness wasn't a luxury you could afford. I mean, you didn't have television, the internet, key parties, badminton, roller skating rinks, museums, libraries, monster truck rallies, or carnival face painters to keep you entertained. Frankly, you were probably too busy trying not to get killed by Apaches or mountain lions to bemoan the dearth of Renaissance Faires.

Before the advent of electricity and widespread literacy, I'm sure some of the most popular hobbies were staring vacantly into space and filling the lanterns with whale oil. But now that we've become inured to grand spectacle in this age of CGI films and Cher concerts, we expect everything to be absolutely fascinating or we won't give it the time of day.

Below is a current photograph of the top of the filing cabinets in my office. This is, basically, all of my filing (unfiled) since the beginning of 2012—an accumulation of seven months of neglected paperwork. (Incidentally, there's another row of stacks behind the first row.) Most of the time, I don't even really 'see' all of it; it's just additional visual noise in an office already polluted with Successories® motivational posters and Post-It notes. But sometimes the peripheral knowledge that it's there—growing larger and more unmanageable, day by life-extinguishing day—fills me with a faint terror. (Is 'faint terror' an oxymoron?) 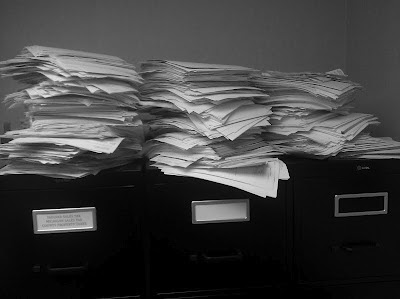 And yet... my lack of interest in filing always overpowers my unease about the slumping stacks of paper. When—if ever—will I be motivated enough to start just sorting all of that shit, let alone filing it? What theoretical fire will be lit under my ass to overcome the unimaginable boringness of organizing all that paperwork?

Sometimes coworkers come into my office looking for old invoices. Sometimes it's even fairly urgent (to them, anyway—nothing work-related is very urgent to me). I tell them I have to 'locate' it and dismiss them. Then I get to look through those haystacks for the needle. And it isn't easy. It might as well be Jimmy Hoffa's body I'm looking for.

And yet... these frustrating searches don't motivate me to think about dealing with the mess. Procrastination isn't even the issue. I don't say, 'Tomorrow—or next week—I'll get to it.' The truth is that I have no active intention of ever getting to it. I'm kind of pinning my hopes on the possibility that the building will burn down over the weekend. Did I mention that when the taxi drove into my office a few years ago that it saved me from having to file all the shit I had stacked in my office then? That probably wasn't a good precedent to set—anticipating major structural damages so that I don't have to do boring stuff. But a boy can dream.
excreted by David at 9:53 AM

Email ThisBlogThis!Share to TwitterShare to FacebookShare to Pinterest
file under: autobio, ennui, workplace