When I'm driving around town, attempting to travel quickly and efficiently from Point A to Point B, I encounter numerous bad drivers. Unless you are one of them, you can probably relate to my frustration. Many are the times I've fantasized about installing a howitzer to the top of my Nissan—which would then be controlled by a repurposed radio preset button. Woe betide the driver in front of me when I misjudge the location of the All 80s music station. Your Buick Skylark will rain down from the sky in bolts and mangled strips of plastic as I obliviously lip sync to T'Pau's 'Heart and Soul.'

Without ever intending to, I've gradually started to mentally classify bad drivers. There are certain types and styles of bad driving which consistently appear on the roads, and these are just a few of them: 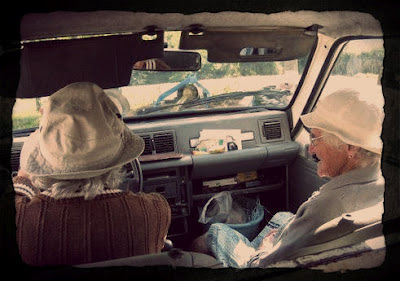 1. Although they are perhaps the least culpable bad drivers, the literalist is maybe the one I want to drag out of his car and pistol whip the most. These are the drivers whose devotion to the rules of the road borders on zealotry. They not only stop completely at stop signs; they also count up to 3-Mississippi before they even think about entering the intersection. Even in the least traveled suburban neighborhoods, they stop and crane their necks (looking for oncoming traffic) so dramatically that you suspect they'd rather wait for a car to approach so that their effort will be justified. Just on the way home from work today, a Dodge something-or-other paused at a three-way residential T intersection long enough for me to check my phone, change the radio station, and hard boil an egg. And when the literalist is actually in motion, he isn't any better. Driving at least one mile per hour below the speed limit is a point of honor for him. I'm sure this conscientiousness is somehow tied into a misguided sense of civic duty, but I prefer to imagine that he's just a twatty suck-up who wants Mr. Police Man to come along and see him doing the 'right thing.' Sure, he probably goes home and beats off to Russian kiddie porn, but in the blinding light of day his conscience is clear: he doesn't speed, he always signals (sometimes five miles ahead of time), and he brings his car to a screeching halt as soon as the light changes to yellow, inevitably causing a five-car pile-up that kills three and maims a blind orphan. I hope he's happy with himself. 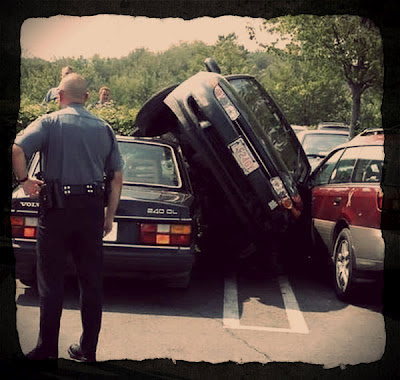 2. A persistent bugaboo on two-lane roads is the blockade. This is when two vehicles travel side-by-side down the street as if engaged in some kind of intimate mating ritual. One is almost reluctant to disturb the Taurus and Camry in flagrante delico, until one recalls that the left lane is for passing, not 69ing. Gradually two lines of traffic form behind the blockade, while the two drivers, either unaware or sadistic, tango toward their destination without any perceptible urgency. When the number of cars in front of the blockade are few and the number behind the blockade are four or more, then it turns into a parade. You might as well festoon your car with crepe paper and flowers because you're not going anywhere unless you decide to turn off and take an alternate route—but then the terrorists have won. 3. We all know about the green hoarders and have done our share of violence to them in our daydreams. These are the assholes in front of you at a stoplight—usually a very, very, very long stoplight (and I mean go-ahead-and-pack-a-lunch long)—who aren't paying attention when the light turns green, so they use up a lot of the green time staring at their crotch/phone, beating their children, trying to reach something under the seat, or having a heart attack.  Of course, the green hoarder eventually makes it through the light but leaves you behind for another round of this bullshit. 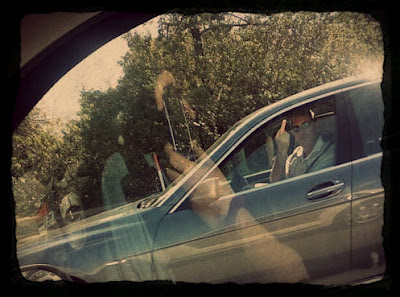 4. And let's not forget about the fraidy cats—those anxiety-ridden drivers for whom the prospect of merging, turning left without an arrow, or pulling out onto a road is too distressing to even contemplate. If the fraidy cat can see a car through a medium-strength telescope, then it's by definition too close to make a left-hand turn in front of. If only there were a way to make it so that every road went straight and there were never any turns or intersections. The fraidy cat probably wouldn't even care where all these straight roads lead to—just as long as he doesn't have to merge onto a highway during rush hour traffic. If cruel fate absolutely insists that he merge, then he will do the only sensible thing: slow down (and possibly come to a near-stop) so that he can successfully insert himself into traffic traveling at 70 mph. And, worse yet, if the fraidy cat wants to turn onto a high-speed road, you might as well send someone out with barricades and flares to stop traffic within a one-mile perimeter because that's the only way he'll ever budge.
excreted by David at 6:26 PM