Last night I watched Olive Films' newly remastered Blu-Ray release of Nicholas Ray's strange and fascinating 1954 western Johnny Guitar, starring Joan Crawford, Mercedes McCambridge, and Sterling Hayden. All the washed-out colors and bleariness of the Korean DVD version—previously the only version available in the U.S.—have been replaced by the startling colors and crystalline clarity of the film as it was intended to be seen, nearly sixty years ago. Johnny Guitar probably won't convert the most resolute detractors of the western, but it is likely to disorient viewers expecting a familiar, assembly-line treatment of the genre.

You can go ahead and forget about the title—because this film isn't really about the tall, guitar-strumming tough-guy played by Sterling Hayden—who probably sensed he was only part of the set decoration here; it's the story of Vienna (Crawford), a ballsy entrepreneur in a burgeoning western town who whored and wheedled her way into the ownership of a saloon-casino bearing her name. Always savvy and calculating, Vienna realizes her gin joint will be a huge success once the new rail line comes through and sets up a depot in town, so she's intent on waiting it out.

Enter the villain—a sexually-repressed, blood-thirsty dyke named Emma Small (McCambridge) who hates Vienna for a jumble of reasons, ranging from the economic to the  baldly Freudian. (Anyone who's familiar with the voice and appearance of Ms. McCambridge knows that she was born to play this role. She's wound up so tight that her corset fasteners might fire off like bullets.) Emma organizes an angry mob in an attempt to frame Vienna for aiding and abetting crimes committed by the Dancing Kid and his gang. (Yep. The Dancing Kid.) But just about then, Vienna's old lover Johnny Guitar (Hayden) strolls into town; she's sent for him to protect her from the (some might say McCarthyist-style) witchhunters. Soon we discover, however, that a tough broad like Vienna doesn't need much help from men, most of whom are weak, easily manipulated, and not very smart.

So this is one interesting thing about Johnny Guitar: both the main protagonist and antagonist are females, and both are stronger (at least mentally) and braver than their male counterparts. At the beginning, with a crowd of men led by Emma invading her saloon, Vienna—wearing pants, a holster, and a fuck-you glare—calmly descends the stairs, fires off a few melodramatic verbal sallies, and challenges any one of her accusers to shoot her down—if he dares. She defiantly aims her gun into the mob and never breaks a proverbial sweat. It's just more dirty work that has to be done—and there are certainly no men around who are capable of doing it. 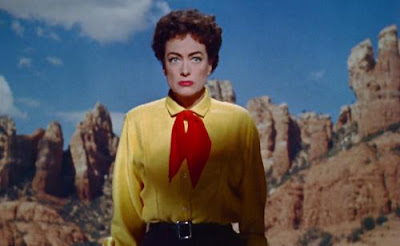 For many viewers, Johnny Guitar will register as a triumph of kitsch rather than a straightforward, earnest western. The film is simply too outrageous in many of its particulars—the bright surreal colors, the scenery chewing, the flouting of genre conventions—to be interpreted as just another gallop through the dust. Whether intentionally or not, the film seems to embody the western and offer commentary on it at the same time. This is a difficult balancing act to pull off, and it perhaps explains why Johnny Guitar was not successful when it was originally released and was met with much critical perplexity. It took the critics (and, later, filmmakers) of the French New Wave (like François Truffaut and Jean-Luc Godard) to recognize Johnny Guitar as a masterpiece of auteurist cinema, which saw a director's oeuvre as a personal expression of his distinct outlook and style. Godard even once famously said, 'The cinema is Nicholas Ray.' (It's a shame that most people today only know Ray from A Rebel Without a Cause, one of his least interesting films. Johnny Guitar, In a Lonely Place, On Dangerous Ground, and Bigger Than Life are all exceptional films, characteristic of Ray's unique style.) 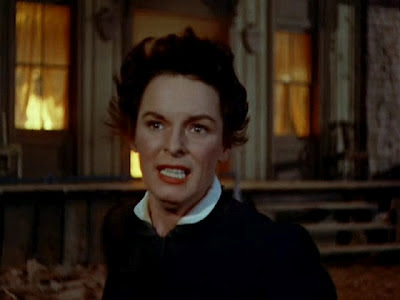 The film's background adds another dimension to the experience of watching it. Reportedly, both Sterling Hayden and Mercedes McCambridge hated working with Joan Crawford. Crawford tried, unsuccessfully, to have McCambridge fired and replaced with her friend; McCambridge later went on to publicly characterize Crawford as 'a mean, tipsy, powerful, rotten-egg lady.' This may or may not have contributed to the occasionally hyperbolic intensity of McCambridge's on-screen confrontations with Crawford in the film. Either way, it's a extratextual note that makes these scenes even more fun to watch. Hayden meanwhile disliked both Crawford and the film itself. Apparently he didn't agree with Truffaut's characterization of the film as 'The Beauty and the Beast of westerns.' 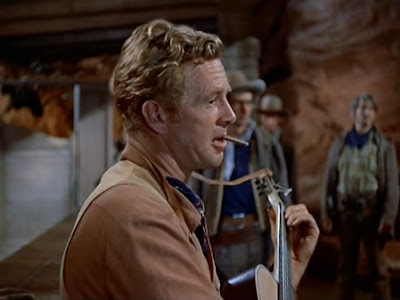 Popular critical opinion has indeed shifted—as it often does—and Johnny Guitar is now considered a classic. I'm still not sure everyone will know what to make of its unabashed artificiality, but it certainly isn't your father's John Wayne movie. In fact, I'd love to hear what John Wayne thought of this movie, if he ever saw it. I'm sure his response would have been just as colorful as Johnny Guitar's production design.
excreted by David at 10:57 AM