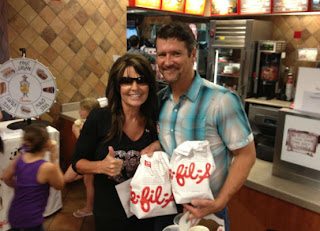 At the initiative of model-Christian Mike Huckabee, August 1st was declared Chick-fil-A Appreciation Day—apparently because weak-willed Christians across the nation were losing sight of some of their faith's core values—like ostracism and callousness.

Okay. That's not entirely fair. I know that there are plenty of self-identifying Christians who wouldn't be caught dead at a feeding frenzy dedicated to exclusion and self-righteousness. While I am not a Christian, I appreciate that these people are at least consistent with the examples of Christ, who was known to pal around with prostitutes and warn against casting the first stone. (It's interesting that many die-hard Christians seem more attracted to the barbarism of the Old Testament than the infinitely more compassionate New Testament—which is after all the text that distinguishes them from other religions. But I digress.)

I know that anything that I could say about this Chick-fil-A bullshit is obvious to anyone with an ounce of intelligence or a capacity for critical thinking, but I can't help fearing we imagine everything is so obvious that we never have to say it. So nothing sensible gets said while the dummies of the world shout the most insane, strait-jacket-inviting screeds from the rooftops. Maybe it's just a compulsion of mine: I need to say things so that I know they've been said. I've checked it off, done my duty, gone on my way.

First off, in what way does the government's sanction of gay marriage in any way imply that it's moral? Do we usually consult United States law to determine what is the morally right thing to do? The last time I checked, legislators weren't overly concerned with whether I honored my father or mother or kept holy the Sabbath. So we must distinguish between personal morality and legality. These are two distinct things. They may have some relationship with each other, but it's a problematic, tenuous relationship at best. Just because the government accepts gays, in whatever capacity, doesn't mean that you must accept them on a personal level. Yes, you may be prohibited from discriminating against gays in hiring and other practices, but these are generally professional rather than personal matters. In your bilious heart of hearts, you can continue to despise them and bad mouth them to anyone in your personal life who will tolerate you.

An obvious problem arises when we try subjugate law to personal morality, particularly a morality based on religious 'revelation.' First of all, we do not all share the same morality, and neither are we required to. Some might claim, without really thinking about it of course, that prohibitions against murder contradict this. Not so. In the case of murder you are staking one man's morality against another's. If you wish to exercise your liberty to kill someone with a pick ax to the head, you come in conflict with the victim's liberty to... remain living. Clearly, the victim's fundamental right to live trumps your whim or your taste for blood, so this isn't necessarily an example of a personal or arbitrary morality being codified into law. On the other hand, gay marriage would seem to directly affect only the two consenting adults who enter into it. As far as you are concerned, if you happen to be a hateful bigot, this gay couple can be (personally speaking) dead to you once they marry. The right to maintain your morality has not been tampered with in any way. If we flip it around, however, and you elect a particular candidate in order to explicitly outlaw gay marriage, then you (as an outsider) have placed your 'right' to live in a nation without gay marriage over and above somebody else's right to be married. This is truly insane. You are stepping in from a directly unaffected vantage to establish your preference or taste over somebody else's (directly affected) civil right. (Or what should be a civil right, I should say.)

And don't even try to feed me any of that bullshit about how gay marriage does directly affect you because it devalues marriage and further escalates an already steep decline into moral decadence. If you actually believe that, I feel sorry for you because you are exceptionally stupid. There's no other way to explain it. Haven't divorce, infidelity, marriages of convenience, marriages of whim, and marriages of abuse among straight couples already accomplished the degradation of marriage as you see it? (This is all so obvious that I'm bored typing it out. It's like when you have to explain to an old person how to use the internet. It will never be thoroughly absorbed and comprehended.) I haven't yet seen a grass roots Christian convocation to decry the ill effects of straight marriage that was as passionate and well-attended as Chick-fil-A Appreciation Day. The only substantial effect gay marriage will have on marriage itself will be the economic windfall for the wedding planning industry. The damage to marriage has been done already. It's truly difficult to imagine how marriage could be any more inconsequential in this nation. It requires only the same level of commitment as 'going steady' did in the 1950s.

But now I want to cut to the chase here. Yesterday I read an article about Chick-fil-A Appreciation Day in the local newspaper describing the record crowds at a nearby franchise. It also mentioned how some people had driven for literally hours to get to this Chick-fil-A because they didn't have any franchises near them. I'm going to ask all of you 'Christians' who might stumble upon this blog entry a serious question—and I want you to answer it to yourself and not to me (because I really don't give a fuck what your answer is, honestly). I want you to respond to this question not with the heat of your passions, but with the cool precision of your contemplative mind, if you happen to have one. Do you honestly think that Jesus Christ, your Savior, the Risen Lord, would get in his Chevy F150 and drive one hundred miles to a fast food restaurant in order to support (in an entirely frivolous and unhealthy way, I might add) a company president who situates himself in a position of moral judgment of other people's lives? Honestly? Do you think that? I am assuming you've read about Jesus in the New Testament, in whole or in part, and are somewhat aware that he wasn't too thrilled with grandstanding moralists (remember the pharisees?) or self-appointed judges. (Does any of that ring a bell at all?) What would possess you to think it was a good idea to drive to a fast food restaurant in order to buy sandwiches as an act of solidarity with a man who uses his money and public visibility to help exclude people and (maybe not intentionally, but in point of fact) to further inflame anti-gay sentiment? How would you defend yourself if Jesus was sitting across from you at Starbucks asking about your rationale?

This is the problem, I think. Some people (not all) like to retrofit their religions to conform to their own attitudes and prejudices. They cherry pick specific details without thinking critically about them or looking at the bigger picture. If I hate gays, I want my God to hate them too—so that I am endorsed in my bigotry by the highest authority—even higher than the law of man. This is the point where angry Christians crack open a can of smokescreen and insist they don't hate gays—they just hate the sin they're committing. This is firstly problematic in that gays are defined primarily, as being distinct from others, by the 'sin' they commit. But let's leave that alone for a minute because we don't even need that argument to get where we're going here. Let's just head straight for the $64,000 Question: Why are you stone-throwing? What Christian principle ('Christian' meaning 'derived from the teachings of Jesus Christ') led you to this self-appointment as moral judge? If God exists, and if gay sex really honks him off, I've got news for you: He'll be able to deal with the sinner himself in the afterlife. He doesn't really need your help. He's, like, omniscient and omnipotent and all the other omnis—so what's a little, fallible cretin like you really bringing to the table? Isn't he better appraised of the particulars of the sinner's choices and thinking than you are and therefore better able to arrive at a nuanced judgment, rather than relying solely on your crude equation GAY MARRIAGE = EVIL?

I am also well aware that a lot of people who showed up for Chick-fil-A Appreciation Day probably don't care all that much about Christianity. They just hate gay people and delight in any rallying call they can find. There's really no arguing with some of these people—because they are essentially of the opinion that human beings are (morally?) responsible for the way they are born. This is, of course, a religious belief in its own right, akin to original sin. We are born guilty, but men who want to fuck each other up the ass are born even guiltier. So what it comes down to is this: Nothing I write here is likely to convince people who might come across it to mind their own business and to try doing something positive with their lives, rather than acting in opposition to everything. There are so many things you can do to make the world a better place—yes, I know that sounds spectacularly gagworthy, but it's true—(while at the same time not marginalizing, excluding, or hating on others) that I just can't wrap my mind around the fact that a woman actually drove two hours to buy a sandwich. To buy a sandwich! If she really wanted a sandwich, fine, but would she have done this any other day? This is your newsworthy contribution to the betterment of the world: You ate a chicken patty and some waffle fries. Hooray for you.
excreted by David at 9:57 AM