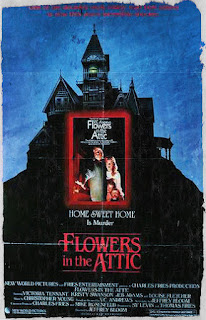 Flowers in the Attic

Kristy Swanson is a skin-peelingly bad actress, but she's almost like Katherine Hepburn in The Lion in Winter next to her male lead Jeb Adams, who was rightfully never heard from again after he appeared in this film adaptation of the popular (and eyebrow-raising) 1970s novel by V.C. Andrews. Swanson and Adams play Cathy and Christopher, two vaguely Mormon-seeming teenagers, who are locked up (for months, years...?) with their two younger siblings in an attic by their mother after their father dies. In the novel, for want of anything better to do, Cathy and Christopher eventually start fucking or giving each other handjobs or something*, but all that's excised from the film along with any scenes that are either interesting or competent. Even the more established actresses Louise Fletcher and Victoria Tennant seem uncommitted to the film—popping into the attic occasionally to deliver their lines woodenly and then retreating to their trailers and downing Percocet like Skittles.


The renowned auteur Jeffrey Bloom directed this shitstorm. He's the also director of such seminal films as Dogpound Shuffle and Blood Beach—both frequently cited as an influence on Bela Tarr (or Shecky Tarr, I can never remember which)—but Flowers in the Attic would prove to be Bloom's magnum opus. (The poor jerk.) This is the film where he most fully displays his remarkable lack of insight into how normal Earthlings act, speak, and even breathe. One almost supposes he was raised by gorillas on a distant island, picked up one day on a catamaran, and shipped off to Hollywood to see what the hell he could do with this (incest-free) film about incest and child abuse targeted at the teenage girl demographic. Apparently no one who was raised in civilized society wanted to direct the thing. Even Wes Craven turned it down. And when Wes Craven turns a movie down and you end up taking it, you're left with that nagging realization that you may actually be a worse director than Wes Craven. So you might as well just kill yourself.


*I'm not kidding about this. Yes, parents, this is what your young daughters were reading  throughout the 1980s. You were obviously a failure as a parent. 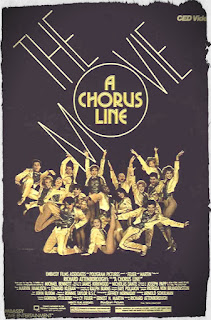 A Chorus Line: The Movie

Back in the early days of the cable channel Encore, they had about four movies in their entire collection: Neverending Story, Conan the Destroyer (another wonderful terrible film), Phantom of the Paradise, and this movie... Sheer probability determined that you were likely to watch all four of them sooner or later. But none of them caused me as much vicarious embarrassment as A Chorus Line: The Movie, a woefully 80s, very jazz handsy kinda of movie. Michael Douglas shouts much of his performance because he's the crotchety, constipated director of the musical within the musical that these annoying fucks extremely gifted dancers are auditioning for.

Throughout the audition, the dancers sing songs so that we, the audience, get to know more about them: their hopes, their dreams, their fears, their disappointments... Unfortunately these are all people you never want to know anything about. In fact they're the kind of people that if you see on the street you pretend you're talking on your cell phone so you don't have to talk to them. ('Sorry! It's my biopsy results!') One dancer is played by one of the Landers sisters—don't ask me which because it has never mattered—and she sings a song called 'Dance: Ten; Looks: Three.' Apparently she never got any parts because she didn't have any tits, so she gets a boob job—and somehow she still doesn't have any tits. But she sure is happy about it. There's another guy who sings a song about a lemon pie sailing across the sky into the ocean. This is like Sid and Marty Krofft material, if you ask me. And naturally there's another dancer who is Michael Douglas's love interest. She climbs the backstage scaffolding while she sings the showstopper 'What I Did for Love.' (It stops the show because it's so loud, mainly.) Sometimes I like to imagine the film panning down to me, unscrewing some of the bolts in the scaffolds. 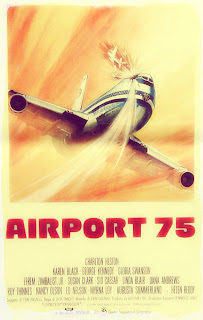 Truth be told, all four Airport films are enough to make you want to cut yourself so you can channel your abstract film-viewing pain into something tangible and life-draining. The first one, simply called Airport, was actually nominated for Best Picture and therefore ensured the artistic irrelevance of the Oscars thereafter. I mean, this is essentially The Love Boat on a plane—a gaggle of celebrities, mostly has-beens, like Burt Lancaster, Helen Hayes, and Lloyd Nolan, brought together for an easy payday a thrilling adventure! Airport 77 was a boring rip-off of The Poseidon Adventure, in which the airplane sinks to the bottom of the sea, and it starred more washed-up luminaries like Jimmy Stewart, Joseph Cotten, and Olivia de Havilland*. Then Concorde: Airport 79 simply gave up even trying to be a serious film and featured George Kennedy opening up a window in the cockpit of the Concorde while it is airborne, as if it were a Dodge Dart at the Burger King drive thru, and firing a handgun out of the aforementioned window at a heat-seeking missile that is pursuing the plane. I SWEAR TO GOD I AM NOT JOKING.

Airport 75, however, is the wonderfullest, terriblest of the bunch, I think, because it's a better balance of earnest ambitions and sheer balls-to-the-wall stupidity. Creepy, cross-eyed Karen Black is a flight attendant on a 747 that is struck by a small airplane when its pilot has a heart attack. This tears a massive hole in the cockpit that sucks out the pilots. (This scene is as hilarious as you're imagining, by the way.) Karen Black must then save the day and pilot the plane to safety. She is somehow able to sit in the (now) rag-top cockpit and hunt-and-peck at the controls while the plane is moving at hundreds of miles an hour with little or no discomfort or distress. Eventually her macho boyfriend, Charlton Heston, who is conveniently also a pilot, is sent up in a helicopter which will fly ABOVE the 747 at the SAME FUCKING SPEED and lower him into the hole in the cockpit. I mean... seriously... why are you not running out to locate a copy of this movie right now?

*As of this writing, by the way, Olivia de Havilland, star of Gone With the Wind, is still alive. How is that even possible?

Email ThisBlogThis!Share to TwitterShare to FacebookShare to Pinterest
file under: art-ish, film