twilight of the idols.

Well, I'm reading Nietzsche again. (Why does that sound like a confession? It's almost like I'm having a herpes outbreak or something.) When I first 'met' him in college in Intro to Philosophy, I kind of hated the guy. I thought he was a real asshole and a killjoy. All he did all damn day was sit in a stretched-out lawn chair on his front stoop and bitch at all the other philosophers of the Western tradition for walking across his lawn. Gradually, in the twenty or so years since then, without noticing it, I've turned into Nietzsche. Of course, my concerns aren't always of the strictly philosophical variety, but I am very proficient at figuring what is wrong with almost everybody. I'm serious. Give me five minutes in a room alone with you, and I'll tell you how you fail to be acceptable. 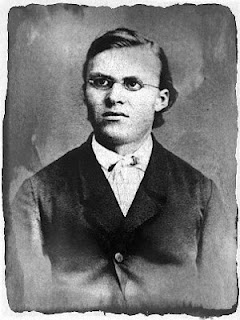 One thing about Nietzsche is that he believes rationality is totally overrated, and I would tend to agree. When was the last time you had some profound, life-changing experience that was derived from your power of reason alone? Probably never. Descartes said famously, 'I think; therefore, I am.' I mean, he even wrote up this whole rigorous explanation (in fucking Latin, for Chrissake) explaining why thinking necessarily entails being. Big whoop, right? I can prove I exist too. Watch me:

I (insofar as 'I' denotes what I believe myself to be) exist (insofar as I use the word 'exist' to denote the most essential thing that I do).

There. Why don't they read me in Intro to Philosophy? It's all just words—nametags we put on stuff that supposedly gives them inherent reality. Does happiness exist if I can't name it? I wonder. I'm not even kidding. Really think about it: If you didn't have this thing called 'happiness' predefined as an experiential state, would you be able to experience it?  Does the name encapsulate and define the thing itself?

Don't throw tomatoes. I'm an amateur here. I'm just saying that if you take rational thought to its furthest extreme, you almost always will end up insane. You'll be so busy thinking experience that you'll find you're unable to experience experience. When the girl scouts get in a barroom brawl over a card game in Airplane! or Jeff Daniels gets explosive diarrhea in Dumb and Dumber, do I need to understand the mechanism of humor? When you start seeing everything as a system, a process, an understandable mechanism, you've already died a little. 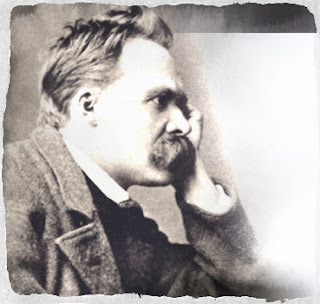 But back to Nietzsche for a moment: One of the things that contributed to his rehabilitation in the pantheon of my esteem was the story (or legend?) that when he finally went full-on batshit crazy in the streets of Turin in 1889—after which he institutionalized for most of the rest of his life—he saw a horse being beaten, and he went up to it and wrapped his arms around it. In the established version, he was trying to protect or comfort the horse.

I can't think of a better way for a man like Friedrich Nietzsche to begin his final descent into madness than with such an unashamed display of instinct—of that fundamental compassion which—along with countless other traits, both complementary and conflicting—defines what it means to be human.

Okay, let's not throw rational thought out the window just yet, but rationalism should be in the service of humankind—not the other way around.

(Oh, and I almost forgot... LOOK AT THAT FUCKING MUSTACHE!) 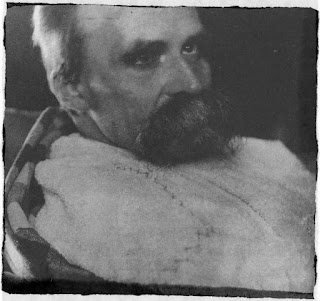