Stephen King's Pet Sematary was probably the first 'adult' novel I read as a young teenager, and for that reason I will always feel some affection for it—even if it was so long ago that I have no idea how good it really is, objectively speaking. I remember that I couldn't put the damn thing down, but that's not saying much. I was a very impressionable adolescent. (Surprised?) When I first saw the movie Logan's Run, for example, I was traumatized—and it was probably responsible for inaugurating the death obsession that has cast its shadow over my life to this very day. It's understandable then that Pet Sematary would have a major impact—because it not only deals with the 'problem' of death itself, but also with the ultimately irresolvable emotions of those left behind. Sure, in time, people get over their grief, but I believe that the survivor's life is forever imprinted with the uncertainty that death brings. My grandmother on my mother's side was my first experience of death; it planted deep within me (so deeply that the conscious mind can't quite get at it) that seed of distrust and disillusionment that has informed all my human relationships ever since. Everyone I know, have known, and ever will know will inevitably die. Some of their deaths I may live to see, and some may be preceded my own. Either way, the net psychological effect is the formative anxiety that undermines any illusion of security we might attempt to conjure through our relationships with others.

All of this dandified talk about the death neurosis, however, can't really obscure the fact that Mary Lambert's film version of Pet Sematary is a giant piece of a cockadoodie. Before Pet Sematary, Lambert's greatest claim to fame was directing a number of memorable Madonna videos, including 'Borderline,' 'Like a Virgin,' 'Material Girl,' and 'Like a Prayer.' Her career never really took off after the success of Pet Sematary—which is kind of a shame... because in a weird way I think the film hinted at some of her (untapped) potential. In certain scenes—whether intentionally or not—Lambert displayed a hard-to-come-by knack for marrying camp and genuine horror. Of course, as you well know, the horror genre is chockablock with camp—but generally in horror-comedies and b-movies, not in movies that actually intend to scare the audience. (She similarly—and effectively—blended camp and more serious themes in the 'Like a Prayer' video.) Unfortunately, I don't think Mary Lambert will have an opportunity to exercise her talents because this was her most recent film: 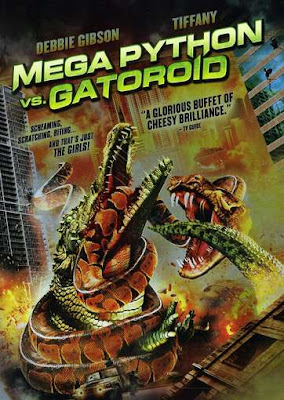 Clearly, Mega Python vs. Gatoroid starring Debbie Gibson and Tiffany is the kind of film a director makes either when (a) she has no other options or (b) she's just given up.

You know how earlier I said that Pet Sematary was a piece of cockadoodie? Well, I don't mean that the film is wholly unsuccessful. There's good cockadoodie and there's bad cockadoodie. Good cockadoodie like Pet Sematary is peppered throughout with effective scenes and great ideas, but the director just isn't able to pull it all together into a consistent or satisfying cinematic experience. One thing that's entirely top shelf about this movie (and that, honestly, the movie probably doesn't even deserve) is the performance of Fred Gwynne as Jud Crandall, the lead character's neighbor who introduces him to the evil forces that lie beyond the pet cemetery. Gwynne (whom you know better as Herman Munster) brings some actual humanity to the film that the principal actors Dale Midkiff and Denise Crosby are apparently incapable of. 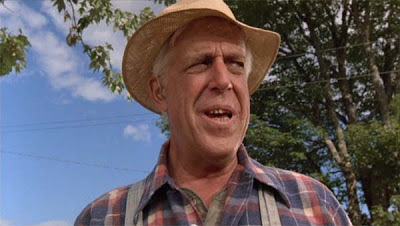 Who doesn't want to shoot the breeze with Jud Crandall?

Other things that the film can be proud of are the creepy-as-all-fuck scenes with Zelda, the woman dying of spinal meningitis and the eerie/comic scenes with Victor Pascow, the ghost of a college-aged jogger who died from a grisly head injury. Both of these characters—marginal though they are to the story—hint at Lambert's vision. She really isn't just another factory-produced horror director. She imbues many of her scenes with an uncanniness that is uniquely her own. 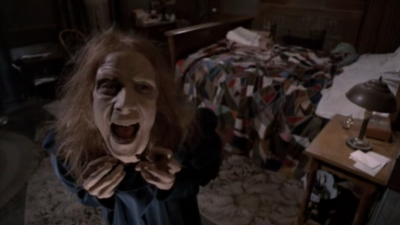 Zelda. I've never quite recovered from her scenes in this movie. 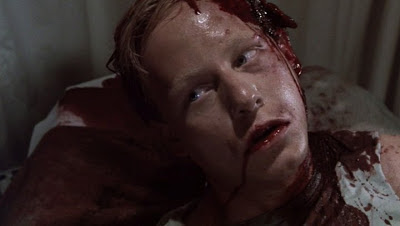 But... there's a lot of unforgivable fuckery in Pet Sematary too. That's why it will never rise above cockadoodie status, although it had the potential to be so much more. This isn't an exhaustive list of everything that's wrong with this movie, but I think it's enough evidence to convict Pet Sematary of being not very good:

1. Dale fuckin' Midkiff. Once upon a time in the 1980s there was an actor who was semi-famous for about twelve seconds. His career didn't even measure up to the Warholian fifteen-minute standard. He played Elvis in the TV movie Elvis & Me and then he played Louis Creed in Pet Sematary—and for the most part he was never heard from again. (See? Sometimes the mercurial forces of fate are merciful.) Dale Midkiff is so awful in this movie that even while watching this alone—except for my cat of course—I couldn't resist doing impersonations of Dale Midkiff line readings. Throughout the course of this film his performance is a roller coaster of emotions ranging from stoical to unfazed to indifferent to narcoleptic. At the top of his game, I think he works himself up to a slightly discomfited state. This is indeed a very, very, very big problem because his character is the center of the film and he goes through a lot of shit that would generally elicit an extreme response from most sentient beings—including but not limited to the death of his son (which—let's face it here—is actually his fault; see item 3 for more on this) and the resurrection of said son as a demonic, murderous zombie. Blasé doesn't really work very well in these situations.

Maybe you needed to take a little lesson from Fred Gwynne, who really knew how to react to the supernatural appropriately: 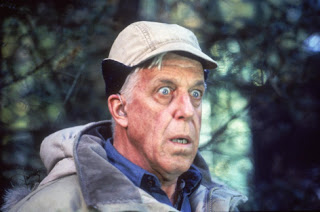 That's right. When a child crawls out of his grave and cuts your Achilles' tendon, there's just no getting around it: it's an OMFG moment. Neither subtlety nor catatonia is gonna get the job done here.

2. Mary Lambert does some things right, but most of the time she just directs with a sledgehammer. For instance, an important plot point is that the Creeds and Jud Crandall live on a dangerous rural highway. So does Lambert give us a normal dangerous rural highway? Hell, no. She gives us a narrow road down which only tanker trucks barrel at ungodly speeds, driven by careless fat men who are too busy jamming to the Ramones to pay attention to any living thing that might get in their way. Now, I think this kind of thing could actually work—if Lambert's world were more stylized. But it's not. So instead of crafting a strange otherworld of symbols and general foreboding, Lambert gets all literal-minded with us and hits us over the head with steam shovel. There are more examples of dunderheaded overkill, but this one was the most emblematic, I think.

3. Louis and Rachel Creed are the worst parents. Ever. We're supposed to feel bad that their son Gage gets splattered on the highway, but instead I was preoccupied with the question of how these two were allowed to breed. They're so dumb I'm surprised they figured out the procreative act strictly on a mechanical level. I'll bet Louis spent the first three months of their marriage trying to put his penis into Rachel's ear. These are just monumentally stupid and irresponsible people who should have been sterilized by the government. Here's all the relevant data. You parse it and tell me what you think.


a. Although the Creeds have two young children and an outdoor cat, they think it's wise to move to a house located along the Highway of Death. As pointed out earlier, only large trucks moving at ridiculous speeds travel down this road.

b. When they first pull up to the house on move-in day, THEY ALREADY LOSE TRACK OF THEIR SON GAGE IN THE FUCKING FRONT YARD. He is around one-and-a-half years old. And they just lose sight of him. He—of course—makes a beeline for the Highway of Death, and their neighbor Jud Crandall has to rescue him from being puréed on the grille of a barreling semi-truck.  You'd think Louis and Rachel would probably take this as a warning, right?  Maybe they better step up their game as parents and quit being total fucking retards?

c. As foreshadowed, the cat is killed on the road. What a shock! (Of course, even before this, Jud tells Louis that the pet cemetery exists because of this highway.)

d. The whole family is having a picnic in the yard. How delightful! Why don't they fly a kite? Fucking fantastic! Here, Gage. You try your hand at the kite. I'm going to turn away from you now and talk to Mommy, all right? You'll be fine, right? I know you won't wander onto the Highway of Death another time while I'm being an inexcusably incompetent parent. Right, Gage? 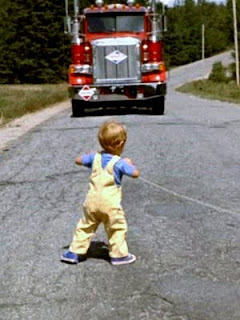