I was going to begin this discussion of Lord of Illusions with a prayer of thanksgiving—in honor of Clive Barker's absence from the director's chair for eighteen glorious, pain-free years—but I just did a little research and discovered that he's slated to direct a feature film known as Tortured Souls, which might possibly be a documentary about his film audiences but don't quote me on that. I guess we can hope that during his nearly two-decade-long cinematic hiatus he has matured as an artist and learned new and exciting ways to wring toe-curlingly bad performances out of his actors, but prudence demands that we leave those chickens uncounted for now.

Do you know how amazingly '90s Lord of Illusions is? Well, I'll tell you. Its main star power consists of Scott Bakula. (I know. You probably forgot he existed too, didn't you?) Scoff if you will, but remember that this is a significant upgrade over his previous leading man Craig Sheffer, whom you probably never knew well enough to forget in the first place.

Bakula plays a New York City private eye—are your eyes rolling yet?—who is sent to Los Angeles to investigate some fat man who dances with topless hookers in a cheap motel room as if he had literally auditioned for the role of Fat Man Who Dances with Topless Hookers in a Cheap Motel Room. This scene (along with almost every other scene) is emblematic of Barker's directorial ineptitude: Bakula is hunkered down outside the motel eating a sandwich, which he takes a bite of, scowls at, and then chucks on the ground in extravagant disgust. (That's his no-nonsense NYC private dick side, apparently.) In plain sight, he's looking into a giant motel room window—curtains open, lights on—where Fat Man frolics (there's really no other word for it) with two prostitutes. What exactly he is doing with these prostitutes is anybody's guess... It looks kind of like an improvised freestyle conga. Undoubtedly, it was Barker's idea of what sexual decadence looks like: prostitutes who purchase their wigs and outfits from Prostitutes 'R Us  pouring champagne into a fat naked guy's mouth in front of an open window. Whoohoo! Party time! Call me old-fashioned, but I remember when people used to get prostitutes for more pragmatic reasons—namely, to fuck them—but apparently this trio is more interested in putting on a show for bystanders, who will then point and exclaim, in suitable disgust, 'Look at that sexual depravity! Oh, my goodness gracious! And to think! They call this the City of Angels! (Tsk. Huff. Sniff.)' 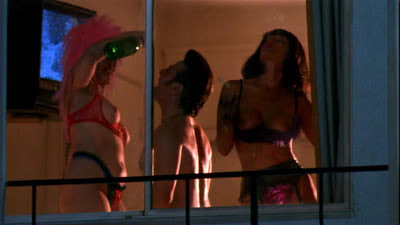 Actually, it's a pretty chaste scene when you consider that the sleazy, pompadoured man could be sticking his penis into one of their orifices or taking a dump on their faces. Maybe if you pick up two prostitutes from Central Casting and start dancing around a motel room with them to bossa nova music, you should ask yourself if you're not doing this all wrong. A lot of women might even do this for free if the champagne were provided and if you asked them nicely. If I were Scott Bakula, lurking in the shrubbery, I'd throw away my sandwich in disgust at this too. Fucking lame-ass city doesn't know how to make a decent pastrami sandwich or how to stage a plausible sexual decadence tableau for all the world to see.

Oh, by the way, speaking of disgust, there's this too: 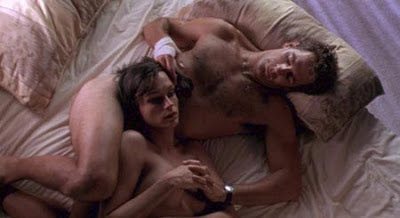 'Oh, my lovely Famke Janssen, why don't we lie together in this awkward post-coital pose until the sun comes up? I can leak residual semen into your beautiful, silken hair. While you're blocking my penis and hairy ball sack from the overhead camera with your angelic face, we'll clasp hands strategically in front of your pert bosoms... No, Famke dear, I never take my wristwatch off during lovemaking. After all, I don't want to miss tonight's Quantum Leap... Oh. Why am I bent this way, you ask? I'm trying to squeak out a fart, my darling, but never you mind. Just let me continue to fuck the hollow between your neck and shoulder as an expression of my undying love for you...'

As Famke wiped ball sweat off her neck with a Bounty paper towel, she called to renegotiate her contract. Clive Barker, a gay man, was all, like, 'This is what straight couples do after they have sex, right?' Gay men are too busy using Resolve® to get fecal stains out of the 300-count percale sheets to bother with Twister poses like this.

I realize that I haven't even told you what this film is about, but I'm too disgusted now. Imagine me watching this movie through a motel room window and throwing my inadequate sandwich to the ground in outrage. Now imagine resting your head in my crotch while I fart. You like that, don't you? Pervert.
excreted by David at 10:11 AM