winter of our discontent.

Apparently Stephen King didn't like Stanley Kubrick's adaptation of his dumb little novel. Well, boo-hoo. Were you upset that the movie didn't have topiary animals that come to life like your book did, Stevie? I guess maybe you should think twice before you cash in and option out your books. But—in case nobody told you—this is Stanley fucking Kubrick here. Yeah, I know you're used to having legendary top-tier directors like Fritz Kiersch, Fraser C. Heston, Lewis Teague, and Brett Leonard adapt your books for the screen, but I'm afraid sometimes you just have to suck it up and let hacks like Kubrick and De Palma have a go at your literary masterworks. True, they really can't hope to match the genius you displayed when you directed Maximum Overdrive, but once in awhile I think it's nice to throw a less competent director a few scraps from your table, you know?

Stephen King, you're an idiot. Kubrick's The Shining may or may not be a faithful adaptation of the novel you wrote—I don't really know because I haven't read it—but you have to admit the film is brilliant on its own terms. Even if it's not your book, it's a great film—and I'm willing to bet that Kubrick fixed at least a few problems in the original text. (See the reference to the topiary animals above.)

Now on with the show... I'm not a Jack Nicholson fan in general. He kind of bugs me. You see, I'm really tired of the smarmy characters he plays in almost all of his films—and I suspect that they are mostly subtle variations of his own personality. He's one of those actors who's been treading water for so long that now he's arrived at a place in his career where he's almost a self-parody. Nevertheless, I can't imagine a better or more fitting actor to play the character of Jack Torrance in The Shining. Nicholson is able—with the arch of an eyebrow, a long meaningful glare, or just the tone of his voice—to convey such an overwhelming sense of menace that I can't imagine any actor equaling him here. This was, in other words, a role he was born to play. 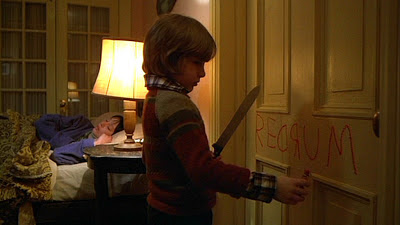 When I think of Stanley Kubrick, I think of precision. In most of his films, every detail seems so precise, so thoroughly considered and calculated, that it borders on OCD. I really don't know much about the man or his way of working, so maybe this is a false impression, but everything in The Shining—the sets, the furniture, the camera movement, the sound, the music, the composition—feels as though it is part of an indivisible, unified whole. That's unusual in filmmaking, I think. There are a few other directors who sometimes give me the same impression—Ingmar Bergman and Orson Welles, for example—but never quite to the degree that Kubrick does.
excreted by David at 10:43 AM