Movies like Waxwork really make me question the wisdom of the Halloween Film Fest project. Was the point of this horror film-viewing exercise to inflict bad entertainment on myself? Did I intend it to become merely an endurance test? There are so many better things I could be doing with my time—but instead, there I sat last night for an hour and thirty-five minutes, watching this excruciatingly dull late-'80s crapfest featuring a cast of one-hit wonders, including Zach Galligan (Gremlins), Dana Ashbrook (Twin Peaks), Deborah Foreman (Valley Girl), and Miles O'Keeffe (Tarzan, the Ape Man). Sure, my main man David Warner also appears in Waxwork, but his bland character just doesn't give him the opportunity to spread his majestic acting wings like the role of Sark in Tron did.

Maybe I only imagined it, but I was under the impression that Waxwork had become a 'cult hit.' And I suppose it might actually qualify as one if college students are just looking for a movie to smoke pot in front of. But you can really do that while watching Out of Africa on fast-forward, and you'll probably be just as entertained. 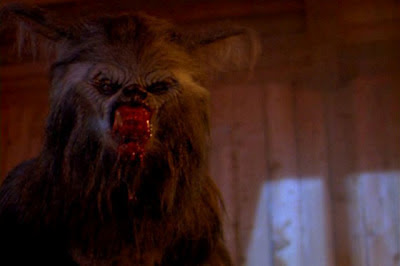 Movies like Waxwork don't just make me question the horror movie marathon; they make me question my place in the universe. Why am I here? Where am I going? What's the point of it all? Then a kind of mid-grade despondency sets in.

At one time, somebody's dream was to make the film Waxwork, and to that end a lot of money and human labor was expended. Now that the dream has been realized, it stands as a symbol of the pathos and futility of all of our greatest ambitions. Whether we cure cancer or just make another shitty movie, it doesn't really matter all that much. Eventually all sentient life will be obliterated by some manner of apocalypse—and our dreams will cease to have existed. Without anyone to remember, the past never even happened. We don't disappear—because we were never there to begin with.