Lon Chaney Jr. was kind of a big, greasy dope. Somehow in The Wolf Man, we are expected to believe that he's Claude Rains' son. Interesting genetic mutation going on there—or maybe the dead mother is the missing link? Maybe she was Anne Ramsey from Throw Momma from the Train. Whatever the case may be, Chaney's character Larry Talbot is really a creep—I mean, even before he turns into a wolf. He spies on the neighbor in her bedroom using a telescope and then accosts her in her place of business with intimate details about her jewelry. (Yeah, that's weird.) Not content with merely being passively creepy, Talbot bullies the woman into going out with him—even though she's engaged to be married and clearly not interested. Who needs the Wolf Man? You've got enough material for a Lifetime World Premiere Movie already... I'm seeing an Alan Thicke type in the sexual predator role, opposite Daphne Zuniga—or a reasonable facsimile thereof.

But we're not supposed to get caught up in Talbot's unlikability as a human because he still has to lycanthropomorphize—is that a word?—into a werewolf. This isn't a story about just another a guy who gets his jollies from spying on the dame across the street as she takes off her earrings—this is a story about a Wolf Man! 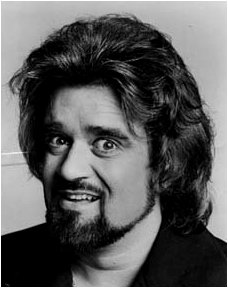 No, not that Wolf Man. The kind who lives the aristocratic life of the 1% by day and the life of a butt-licking canine by night.

Do people think werewolves are scary? I'm not saying they can't be central to an interesting story—but does the thought of them frighten anybody? It's difficult to conceive of. Especially since this particular Wolf Man bears a striking resemblance to actor Tony Roberts. 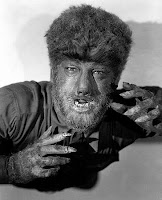 There's no getting around it. These classic Universal horror movies are basically a bunch of malarkey. They're often awkward, creaky, and unintentionally funny—but The Wolf Man was entertaining, nevertheless. They're comforting in the same way that reruns of Love, American Style were when I was home sick from school. They're celluloid security blankets, in other words... Nobody ever claimed a blanket was great art, but it sure is cozy when you're in the right mood.
excreted by David at 5:42 PM