the people of walmart.

Remember the first film in the Halloween Film Fest? It was a piece of cinematic caca known as Children of the Corn. In the post for that film, I talked about how it was essentially giving expression to urban and semi-urban people's fear of rural (or 'backwoods') America.  Well, move the fuck over, corn shuckers, because The Texas Chainsaw Massacre is the holy grail of redneck horror films.  I believe that even though our rational minds might try to convince us that people like Leatherface and his charming family don't exist, most of us suspect that they do. This is America, after all. Most of us have been to WalMart at least a few times in our lives, so we're able to extrapolate the existence of a far worse variety of housebound inbred cannibals that can't quite make it to the superstore to satisfy their duct tape and razor wire needs.

Before I talk about the only Texas Chainsaw Massacre that matters—the original 1974 version—I'd like to share with you a publicity photograph of the cast of the 2003 remake: 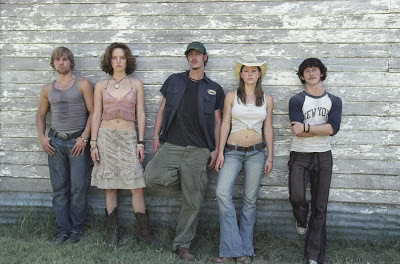 All I have to say in response to this douche lineup is: Fuck you, Hollywood.

I could seriously see Hollywood remaking Schindler's List starring Shia Lebeouf and Jessica Alba and directed by Brett Ratner. It doesn't even matter that there's not a large enough role for a young woman to play in Schindler's List. They'd add the role of a hot, oversexed concentration camp victim who gives handjobs to Nazi officers for an extra helping of stale bread. In the scene where the guards make the skeletal Jews run around the camp naked, they'd include Jessica Alba, at her normal weight, her hair styled and freshly conditioned, her yearning lips dewy with pink lip gloss, and her bare bosoms bouncing in slow motion as sad choral music plays on the soundtrack. The only way you'd be able to distinguish the Concentration Camp Jessica Alba from the regular one is that Concentration Camp Jessica Alba will have one small, artful smudge of dirt on her face, accentuating her cheekbones. Of course, in this version, Schlindler (Shia) only helps the Jews in order to bang the woman he loves.

But I digress. Big time. I really wanted to talk about the original Texas Chainsaw Massacre, which is a pretty fantastic movie about a genetically defective family living in an isolated house somewhere in Texas. Of course, everyone knows Leatherface, the dim-witted masked butcher with love handles. I think one of the most anxiety-provoking sequences of the film is when Leatherface is chasing the last remaining survivor Sally through the woods in the dark of night. It's fortunate for Sally that Leatherface isn't at his fighting weight because she is afflicted with Female Horror Victim Syndrome, which causes the sufferer to fall repeatedly and to trip over basically any obstacle in their path—including twigs, feathers, pebbles, and small air pockets. 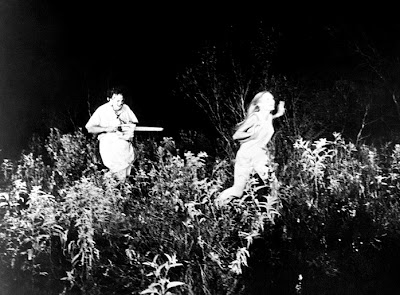 Call me crazy, but there's something about a man running with a chainsaw that's just... disturbing. (OSHA would definitely not approve.) And I'd say that the appeal of Texas Chainsaw Massacre lies in how generally disturbing it is—especially the dinner scene during the last half hour at Leatherface's house. (Leatherface's house... that sounds odd to me. Who is making the mortgage payments?) It's not a film that has a lot of jumps and jolts; it's all about establishing this fucked-up world where absolutely any human perversion is suddenly very possible...
excreted by David at 3:08 PM