My electricity went out yesterday evening, presumably because of the high winds we've been experiencing—which may or may not be related to hurricane Sandy—so I went to sleep early. There was really nothing else to do while sitting in my cold, dark house. Then I woke up in the middle of the night and the power was back on so I decided to soldier on with the Halloween Film Fest... After all, this is the home stretch! I have some of the best horror films scheduled for these last few days, and I won't let climatic conditions or sleeplessness stand in my way. I shudder to think that I wasted my time slogging through SSSSSSS and Bloody Birthday when I should have been watching the heavy hitters... like The Exorcist, for example. 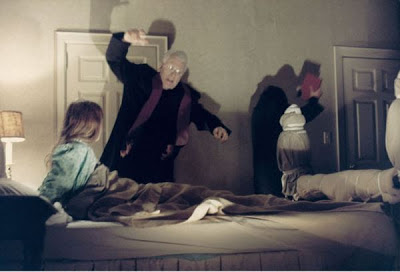 There are few films that fill me with an overwhelming, claustrophobic sense of dread the way The Exorcist does, so maybe it wasn't the best idea to watch this in the middle of the night. I have to say that I also bring a lot of childhood baggage to each and every viewing of this film. As I've mentioned on this blog before, I attended Catholic school from first grade to senior year in high school, so I had lived my life in the long shadow, so to speak, of the demonic forces that take up tenancy in the body of Regan MacNeil (Linda Blair) in the course of the movie. The nuns who taught grade school were particularly preoccupied with the more gothic aspects of their faith, and they spared no gruesome detail in their attempts to inspire a horror-movie-grade fear of Satan in their young, impressionable students. I especially remember the apocalyptic aspects of the visions at Fátima and the other apparitions of the Virgin Mary. They were straight out of The Omen. Sister Innocencia described—with all the gifts of a campfire storyteller, I might add—how the Virgin Mary opened a portal to hell so those (unfortunate) Portuguese children could see the agony and suffering that the underworld promised to the sinful. At that young age, I think I was already predestined for neurosis, so my direful imagination conjured up these scenes with painstaking detail before me. Bloody and burnt, the wretched—the eternally condemned—clamored for mercy—their bony fingers clawing into the earth, their skull-like faces shrieking in terror, their eyes wide as the world from which they were banished. Not a pretty picture, is it? And at the time, I completely believed in all of this. There was also the supposed 'secret of Fátima.' The Virgin Mary told one (or all?) of the kids something horrible, and they were only allowed to tell the Pope... and when the Pope heard what the child told him, he (allegedly) turned deathly-white and passed out. As you know, nothing infuriates a young child more than a secret—to say nothing of a secret that (likely) portends the apocalypse. Please also remember that this was a time when the specter of nuclear war still loomed large—and the nuns liked to foster an expectation of its imminence. At any minute, the red phone handset could be lifted and the buttons could be pushed. What did those motherfucking Fátima kids know about it? Tell me, you assholes! Tell me! 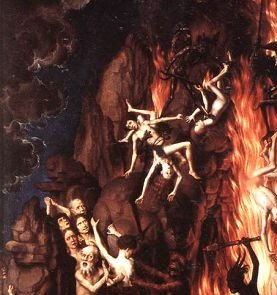 A rendering of the Vision of Hell at Fátima.

This is one of many, many examples of the horror films that the Catholic Church produced in my childhood mind. Later, there were the apparitions at Medjugorje in Bosnia-Herzegovina, during which the pilgrims saw the sun spin in the sky and seem to fall toward the earth—a sneak peek at the fiery death that awaits us all because we have ultimately failed.

As I said, I have a lot of baggage that I bring to Satan-related horror films. And it certainly didn't help that I chose the middle of the night to watch The Exorcist. To set the scene: My (television-viewing) sofa is just diagonal from two sliding glass doors that look out onto my narrow backyard, which is cut short by a dense wall of trees. There are two houses close by on either side, but you can't see any evidence of them when you're looking straight back out of the north-facing windows. There is no light in the backyard except for the residual light that comes from my house and dimly illuminates a few feet of my porch. I can confidently say that if any human being were to become visible in that yard during my viewing of The Exorcist, some EMTs would likely be scraping me off the living room ceiling right now. I mean, it could be an elderly neighbor out looking for her missing dog, and it wouldn't matter. I'd need to be institutionalized. 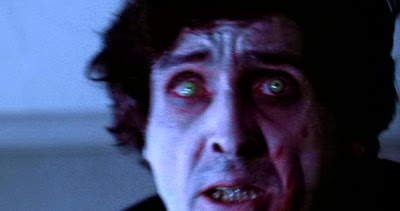 All of this is only to say that The Exorcist and The Exorcist III are the scariest movies I know of. The whole time I watch them, I am consumed with an intense dread that almost feels like it's closing in on me. It's something inescapable—even though that sounds ridiculous because I could simply turn off the movie or never watch it again—but I just can't help myself. I have to see it, and once I've started I can't stop. There are very few movies that genuinely disturb me. And The Exorcist is one of them.
excreted by David at 10:14 AM